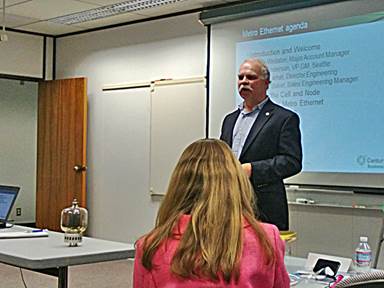 The pre-noon hours in Seattle on Thursday, January 10, 2013 were quite wintery – cold, in fact, with snow in some areas. However, as the membership and guests gathered in the lobby of CentryLink’s downtown Seattle office at 1600 7th Avenue (formerly “Bell Plaza”), we were greeted by a warm, glowing fireplace – just the thing to take the edge off the chill. At about 11:30AM, those that had gathered were escorted to the spacious and well-appointed meeting room on the fourth floor.

Our Members, guests and presenters enjoyed meeting one another and we were all given an opportunity to select a box lunch meal, graciously provided by CenturyLink. Each place setting included a CenturyLink emblazoned flip-note pad (with pen), a 2GB USB drive and a spiral bound PowerPoint-type booklet with a detailed descriptions of the planned presentation.

At about 11:40AM, as we began to enjoy our selected box lunch meals, Chapter Chairman, Arthur Willetts, opened the meeting and offered an opportunity for each in attendance to introduce themselves. Our special guest at the meeting was John Schneider. In addition to having previously held various elected positions within our chapter administration, John is the founder of SBE Chapter 16 Waveguide newsletter. John is also the author and collaborator of several picture based books relating to early Radio facilities in San Francisco and now he is developing a book about the early Seattle Radio. Check out some of the interesting pictures and stories at John’s, “The Radio Historian” web site, www.theradiohistorian.org – if you have pictures of early Radio facilities in the Seattle area, please get in touch with John through his web site.

As Chairman Willetts wrapped up the introductions, we were asked to keep longtime Chapter 16 Member Arne Skoog, a CBS Radio Engineer and cornerstone in our Radio Engineering community, in our thoughts and prayers as he undergoes some medical procedures that have required hospitalization. Further details will be shared as Arne feels is appropriate…we all wish him good health and a speedy recovery.

Treasurer Jon Kasprick delivered his Report, stating that we are solvent and he went on to describe work being done with Waveguide advertisers and sponsors to assure our Chapter’s continued solvency.

Our Vice chairman, Buck Matthew (sporting a nice gray touque), welcomed and thanked the group for the excellent turnout and advised that there are many excellent Chapter meetings in the works.

At noon, the CenturyLink program presentation started. The focus of the presentation was to bring our industry up to speed on the efforts by CenturyLink to develop fiber optic cable (FOC) connectivity to Radio, TV and 2-way users at Tiger Mtn. and Cougar Mtn. – two of the heavily favored Broadcast and telecommunications mountain tops located east of Seattle.

Bruce Baker was the main presenter and he endeared himself to the crowd by relating that he is an Amateur Radio Operator, holds an Electrical Engineering Degree and for many years he was a Boeing Avionics Engineer, having built aviation auto-pilot systems and other cockpit essential instruments.

Bruce shared that the growth of fiber connectivity delivery to cellular towers is on the rise and similarly, Radio and TV broadcast transmission links are poised to change their digital content delivery over to fiber. While most of the in-city tower sites are already served by CenturyLink fiber services through their Metro Ethernet product, a 5Mbps to 1Gbps solution using Cisco 6500 Class switches with industry standard redundancy, most mountain top sites have yet to be connected to their fiber network.

In 1999, Puget Sound Energy (PSE) trenched-in the power line feeding the ATC site at West Tiger Mtn. At the time, they also buried a “submarine-style” fiber optic cable bundle from the PSE Mirrormont Sub Station to the tower site. To this date, all broadcasters on West Tiger Mtn. rely on their microwave STL’s and common carrier microwave T1’s for delivery of their programming and transmitter remote control.

Sam Farhat described the elaborate optical loop-back tests that would be performed to assure the integrity of the numerous individual strands of fiber in this long ago buried and never used fiber optic cable (FOC) path.

CenturyLink is presently in discussions with PSE to purchase that high volume fiber cable package and then connect to their nearby fiber point of entry. Negotiations are expected to be concluded this month. If CenturyLink is successful in securing ownership of the FOC, they intend to extend the fiber connectivity to the former Entercom (now ATC) site, as well as the other telecommunication sites, possibly including East Tiger Mtn.

The discussion then turned to FOC services for Cougar Mtn. facilities. We were informed that CenturyLink already has fiber “in the neighborhood” of the broadcast and telecommunications sites atop Cougar Mtn. CenturyLink is awaiting the release of project funding to complete the FOC path to the various transmitter buildings.