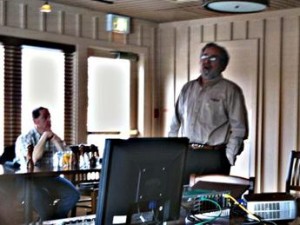 Frank Grundstein, Director of Sales for Logitek, gave a presentation on their line of audio consoles. They distribute their audio over IP, which greatly simplifies studio wiring. Interoperability between manufacturers has been a problem in the past, but the situation is starting to improve. As an integrated system, audio delay is minimized. Delay is partly determined by how many boxes a signal has to go through. For more information, see http://www.logitekaudio.com/