I did find it interesting that Emerald Downs will be resuming horse-racing. However, with one twist…no one will be permitted to be in attendance watching.

It’s always sad to report the passing of a fellow broadcast engineer.

Jon Kenneke was employed by Oregon Public Broadcasting, OPB. He was also an Extra Class Ham with the Call Sign of K7PGB. Jon lived in Albany, Oregon. 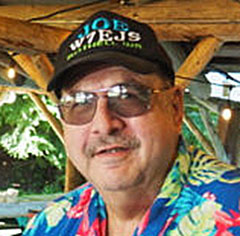 Another passing was Joe Sabo, who worked in the Seattle market.

The SBE is accepting applications for a new Executive Director to replace retiring John Poray. Their goal is to have a final candidate named for the SBE National Meeting in September. Obviously, no-one is sticking their neck out and predicting there will be an in-person meeting.
The FCC has taken the first official steps toward picking an independent entity to handle relocation payments for the clearing of C-Band spectrum for 5G wireless and it is not wasting any time in trying to move the process along. The Wireless Telecommunications Bureau issued a request for proposal last week.
As part of the FCC decision to clear 300 MHZ of the band, 280 MHz for auction and 20 MHz for a guard band, the Commission mandated the creation of a neutral relocation clearinghouse to collect disburse relocation payments, including those collected from new wireless operator licenses to pay the users moving off the spectrum to exit early.
Apparently, efforts by the folks who run the satellites to stall the project citing potential interference issues have fallen short. 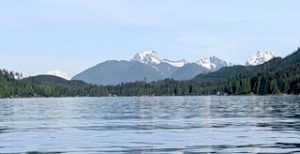 Last month I included a picture of mountains from Dwight Small’s backyard (Wwhich happens to be a lake). In response, Dwight sent me a new one, with names of what we are seeing.
L to R: Glacier Peak, Whitehorse Mtn. (with the snow field at the top) and Three Fingers to the right. I believe the snow field to the right (south) of Whitehorse is known as Boulder Ridge. The peak to the right of that is Mt. Bullen.
Being hunkered down due to COVID-19 is not so bad when you are forced to stay at home and this is the view from your backyard. I’m sure he’s not missing the protests in Seattle either.

A friend recently sent this to me. Sort of describes things of late in engineering terms. 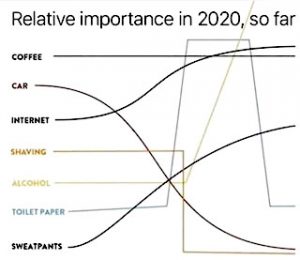 Activity at West Tiger Mountain has moved into high gear with construction related to the Antenna fire of a couple of years ago. To start with, here is a picture Terry Spring shot of the tower before the fire.
THE WAY IT WAS: 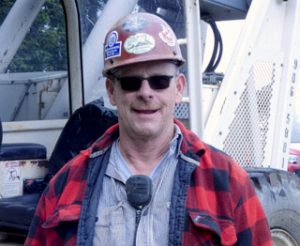 Here are some pictures taken of the project before the end of the month.

First a picture of John Breckenridge, owner of Seacomm Erectors, a local company based in Sultan that’s doing the job. 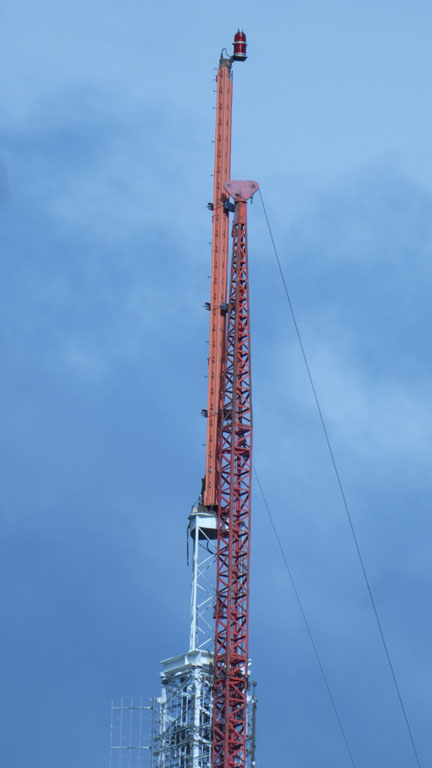 Here is a closeup of the Seacomm large ‘Gin-Pole’ attached to the tower and in position to remove the tower top pole that used to hold the KUNS-TV Antenna. At the bottom of this picture you can see (in white) the top of the square tower that held the old FM Antenna. 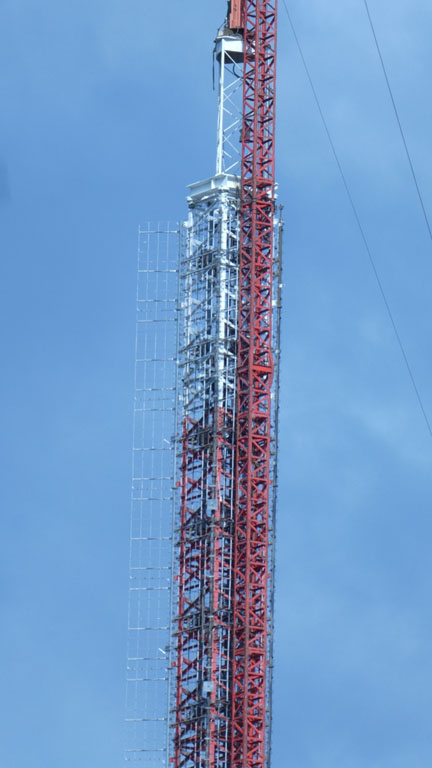 Tilting down, you can see the location of the former FM Antenna. The ‘wires’ on the left were part of that system. 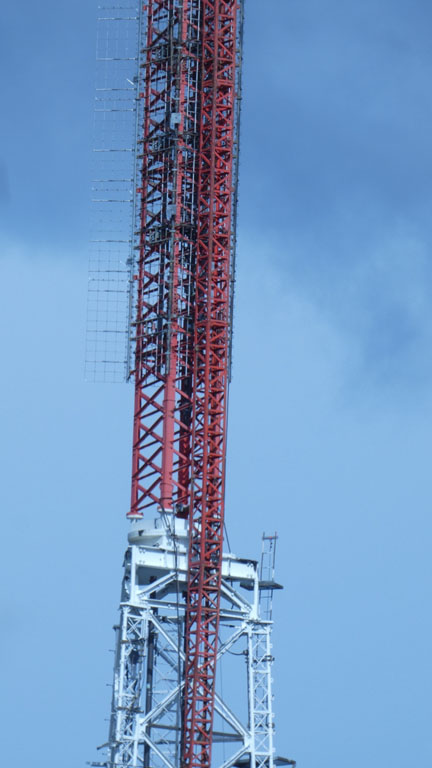 Tilting down some more you can see the rest of the FM’s square tower. The big structure painted white is what I call the adaptor that ‘adapted’ the Triangular tower to the Square one above. 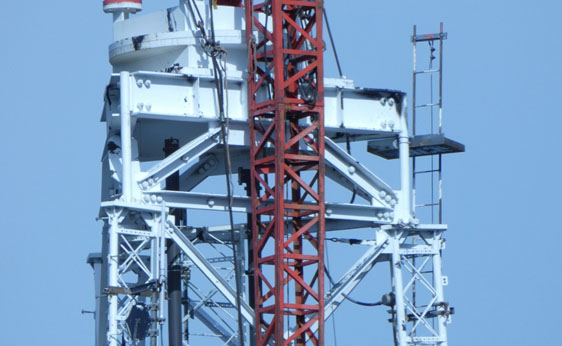 Here’s a closeup of the ‘adaptor’, a very large amount of steel, weighing in excess of 15,000 Pounds. The Red gizmo is the Gin-Pole that has to be strong enough to move these pieces from the ground up here.

In the following pictures you can see how the Gin-Pole is used to hoist the old adapter off of the tower. 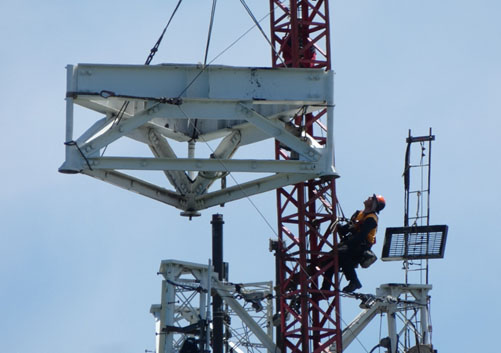 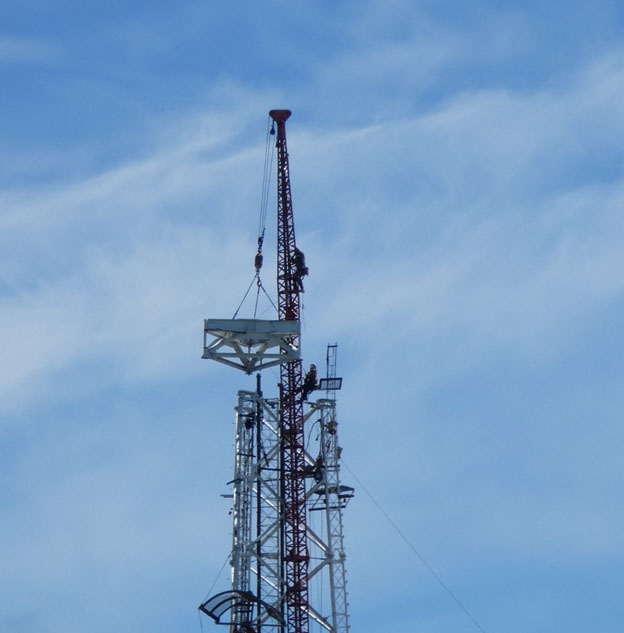 With most of its top pieces now removed, the tower on the right is a lot shorter than the other one. On the other tower, to the left, attached to what’s called a ‘T-Bar’ are two of the site’s TV Stations. 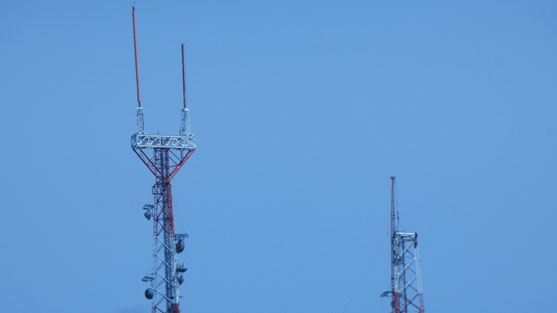 Now laying on the ground, a portion of the Square Tower that held the FM Antenna that burned. A huge amount of steel in this piece. 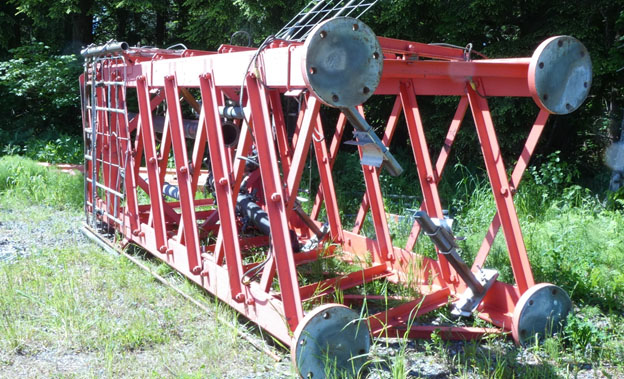 The following picture shows the bottom of the former KUNS-TV Pole. Note the number of large bolts that attached it to the tower.

The following picture shows the new tower sections that will comprise the top of the tower. The round object on the left end is the new LED Beacon that will be on the top. Mounted on the side of this tower will be the new FM Master Antenna for the six radio stations at the site. Hubbard’s 92.5 and 98.9, iHeart Media’s 96.5, 102.5 and 106.1 and Entercom’s 94.1.
As you may have noticed, this new tower is much smaller and lighter than the one it replaced.
The machinery above the tower are the winches that are used to raise and lower the various pieces of tower and antennas. The Satellite Dish belongs to one of the TV stations at the site. 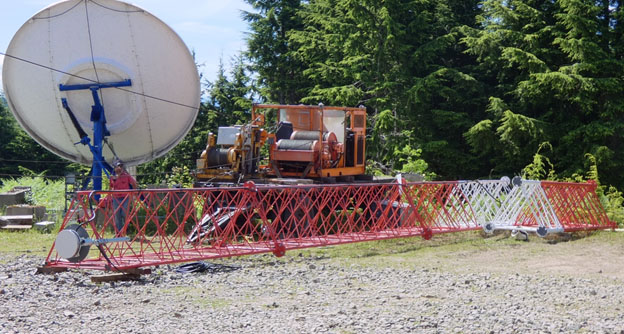 The new Antenna comes in many pieces, all in these cardboard boxes. 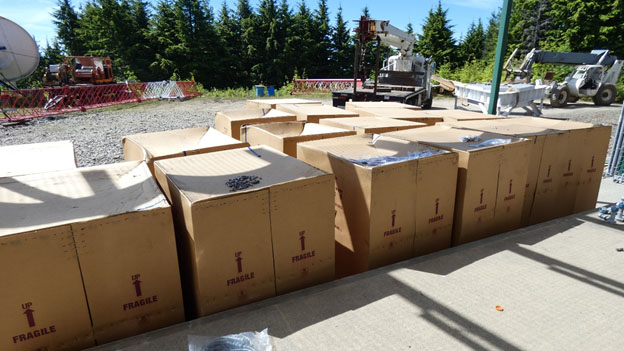 With everything removed, it’s time to start stacking up the new hardware. Those are the Cascades in the distance. 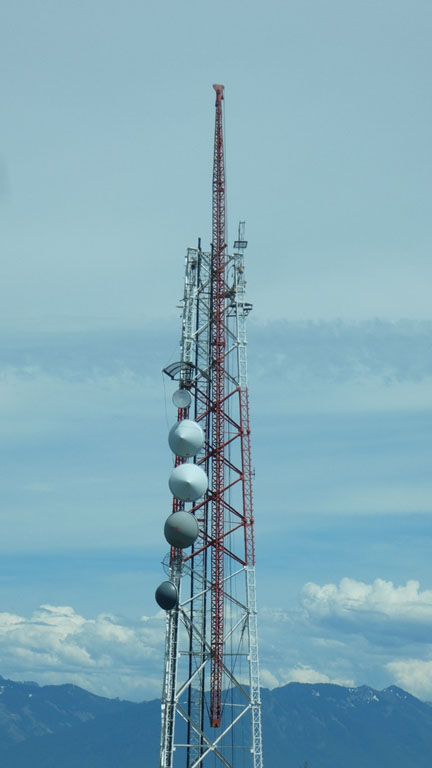 Back down, closer to sea-level, another former location of ball games is getting a new name. Amazon purchased the naming rights to the former Key Arena and, perhaps surprisingly, the name Amazon will not be in lights at the top, but rather ‘Climate Pledge Arena’. Wonder how future sportscasters will stumble over that one? Perhaps it will become known as the PDA? The Baseball location, now called T-Mobile, has not had much airtime thus far due to the whole COVID mess.
When we were first urged to wear masks, there was not much available. This time around there is a huge variety to choose from. In some cases, looking at the ads that have appeared on my phone, they are clearly making a fashion statement. What I am a bit surprised about is the lack of branding going on. I’ve seen masks with Mariners and Seahawks logos, and a few with a familiar ‘W’ or Cougar Logo. Surprisingly, there is not more interest in advertising. And where are the masks with Radio or TV Call Letters?? Of course, with station promotion departments working from home, and revenue down, this is probably not high on the priority list.
In the event you were wondering, the Sun is still quiet. No Sunspots to report.
The FCC is – still – fining people for operating a Pirate/Unlicensed radio station. Most recently Gerald Sutton was requested to pay $10,000 for his illegal FM radio station.
Have to mention how Cumulus has finally closed on a deal, long in the making, that will see them sell their Washington DC WMAL transmitter site for some $75 million. We will likely never see anything like that in this area. Our Major AM transmitter sites are either on Vashon Island or in swamps.
The hopes of many that operate Class A stations to upgrade to a proposed Class C4 is not looking good with the news that the FCC is not likely to support the idea that would take it to the next step.
More bad news for Boeing. Apparently just fixing the computer system that was identified as the cause of two crashes of the 737 Max is not enough to satisfy the FAA and foreign regulators. They want more done before the plane can fly again. As you know, the 737 is made in Renton. 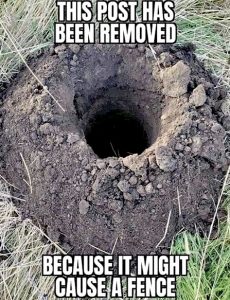 How bad has the pandemic been to Radio revenue? Estimates are ranging from 30 to 60 percent.
And, lastly….House Democrats have voted to make Washington D.C. a State. As if there was not already enough confusion between WDC and Washington State. This is going to be fun to watch. What would they call it? One proposal would name it ‘Washington, Douglass Commonwealth’. Of course, this is a long way from actually taking place.
This one has been making the rounds (I’ve received it from several sources). An interesting commentary on events of the day.
That’s about it for this month, my friends. Lord willing, I will be back next month to most of the usual locations. Until then, stay safe as you carefully venture out with your facial coverings!
Clay, K7CR, CPBE
SBE Member #714 since February 5th, 1