Terry Spring has been selected as the Engineer of the Year Award for 2021.  Terry will be presented the award at the SBE Chapter 16 picnic August 21.  Terry has been a long-time member of the Society of Broadcast Engineers, Seattle Chapter 16, and he has served every position on the Chapter’s Board of Directors.  Terry serves as the secretary for the Washington State Emergency Communications Committee.

Terry began his broadcasting career at KRAB and KUOW while attending the University of Washington.  He graduated with a BA in Communications. He later attended the Ron Bailie School of Broadcasting in Seattle where he received his First Phone.  In 1995 he began his stint as engineer for KWPX eventually becoming the station Chief Engineer, caring for the station’s studio facility in Preston as well as the transmitter facilities on Tiger Mountain.  As a result of his proximity to Tiger, he has often been the first engineer on the mountain top in adverse conditions including snow and windstorms.  Terry keeps his chain saw and tire chains in his truck, ready to go. 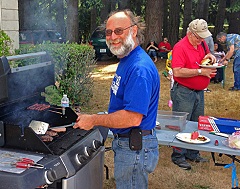 Terry Spring recently announced his retirement as Chief Engineer for Seattle TV station KWPX, Channel 33 after 26 years with the station.

Terry says he will continue his involvement with KAPY-LP, “Valley 104.9” in Carnation, where he not only takes care of the station technical needs, but also volunteers as a DJ for the station’s “Saturday Night Oldies Show.”  Terry also serves as the Barbecue Chef at our Annual Chapter 16 Picnic, serving up the finest hamburgers and hotdogs.

Location to be announced