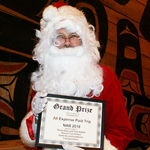 Jim Dalke, WG Editor – It was a Grand Christmas Party at Ivar’s Salmon House on Lake Union this year, Saturday, December 15.  Eighty-two members, guests and sponsors attended the gala event which began as the doors opened at 5:30 for “Happy Hour” hosted by Hatfield and Dawson Engineers.  Live Christmas music was provided by “The Re-Arrangers” followed by an elegant buffett dinner at 7pm which included Ivar’s famous Alder Grilled Salmon Fillets, Grilled Chicken Marsala, and Prime Rib.

A note from Santa:

Dear Chapter 16 Members and Board,

Was the 2017 Chapter 16 Christmas Party GREAT or what?! In addition to the vibrant, chatty social time and the tasty Ivar’s Salmon House meal that we were graced with, I want to take a moment to thank you for continuing the wonderful door prize gift drawing portion of the social event.

The excited and smiling faces of all of our Chapter 16 Members, their families, supporters of the Chapter and, thankfully, including the attendance of four of our Life Members (did you know that we are fortunate to have 18 Life Members in the Seattle Chapter?), all made for a great night with special friends. As the very lucky Grand Prize winner, I, oops, I mean “Santa”, was totally surprised when the final ticket number was drawn & it turned out to be mine!  The Grand Prize of airfare, lodging and entry to the 2018 NAB Show in Las Vegas, with a reservation to attend the SBE National meeting during the convention, is a bit overwhelming, but an absolutely perfect gift to receive.  A special thank you to the team at BSW for providing the NAB Exhibit access pass.

l am looking forward to offering a brief NAB Show report at the Chapter 16 Luncheon this coming May.

Our photo gallery is courtesy of our chapter photographer Allan Freedman: