Our September Zoom Meeting failed due to an unforeseen event and is rescheduled for October 13 at Noon!

Our October Chapter Meeting will be sharing our experiences with Gary Hart who passed away September 2.  Gary worked for “The Telephone Company” in broadcast technical support from the mid 1970’s s until his retirement several years ago.  Gary was featured in several of our chapter meetings over the years, most recently in October 2019 when he was interviewed by Chapter Member John Price.

During his 2019 interview with John, Gary shared his experiences keeping broadcast remotes and STL’s going in an analog world before the advent of the Internet and fiber optics.  Gary worked for Pacific Northwest Bell (PNWB, predecessor of today’s CenturyLink) installing wired broadcast loops for STL’s and remotes, setting up temporary microwave links for television remotes and equalized radio and video lines for the annual broadcast extravaganza Hydro Races.

My longtime friend Gary Hart passed away this morning, September 2 at 5AM. The cause was dementia plus multiple myeloma. His wife Elaine called me with the news. Gary had been living at the Hampton Alzheimer’s Special Care Center in Tumwater since October of 2020. He was born on April 26, 1940 and was a Navy Veteran. I first met Gary in early 1979 when I was just starting as CE at KAYO 1150 when it was on 2939 Fourth Avenue South in Seattle. I remember calling him multiple times over the years saying in jest ‘we’re off the air’ and he’d get a big kick out of it. I last talked to Gary in May. Elaine said that he didn’t recognize anyone anymore, and she’s glad he’s in a much better place. 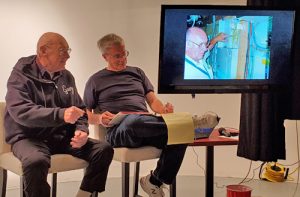 One of the greatest honors I’ve had was to work with Gary on putting together and then later driving him up to KIRO TV on October 9, 2019 for a presentation we did together for Chapter 16. We called it ‘The 4th Network-a conversation with Gary Hart.’  In prior years Gary and Elaine would have BBQ cookouts at their place. Gary loved to cook burgers and talk with all the guests. Topics ranged from his time with the phone company, collecting and distributing wood for his Church’s wood mission and of course ham radio. Gary’s call sign in my mind will always be W7WWI.

Rather than have me fill the rest of this post with my memories of Gary, please post yours below. Even though he disliked computers, I’m sure Gary will be glad to read what you have to say.

I’m sorry for your loss John. I also knew and liked Gary and he was great. Rest in peace Gary.
David Ratener

I first met Gary Hart in 1987 while running a satellite truck for Western Tele-Communications (WTCI) at Key Arena. Gary would provide me with telephones and other circuits needed to do live shots from Key Arena.
I later worked at the Goodwill Games in 1990 and of course, Gary Hart was there as well. I also uplinked distant learning programs for USWest and later Qwest at their radio repair shop near Lake Union (now long gone). He was also present at the Kingdome for many a Mariners game and Seahawks too.
Gary always told me, “….anything you need, call me”. I will miss Gary very much.
Allan Freedman

I didn’t know him well, but Gary was a great guy. I remember when the Galaxy 4 satellite failed suddenly, taking down NPR, back in 1998. It was late afternoon, and I was scrambling to find the best way to get an NPR feed for the next morning, carried on one of the commercial networks. I called Gary a few minutes before quitting time and asked if he could put together a broadcast loop for me. He said no problem, he’d work as long as it took. Such a thing would be impossible with anyone else.
And there was another time when I showed up at a hotel ballroom for an election night remote. I had ordered a phone line, but the order got lost in the company processes. I was worried the broadcast was going to tank, but Gary was there putting in other circuits. Of course, it was no problem at all. He just made things happen for us broadcasters.
Lowell Kiesow

This hit me like a gut punch. I am so very sorry to hear it.
KING5 will be flying the new antenna for our ATSC 3 station on our Queen Anne tower sometime tomorrow. I’ve written the following on the base:

The same antenna will also be carrying a memorial to my own Father who passed away last February and, like Gary, provided me with encouragement and mentorship early in my career.
It is our honor to fly a small memorial to Gary on our new antenna.
For anyone who is curious, the one to my Father reads:

It is appropriate to memorialize Gary on the same antenna as my Father because both of these men provided me with encouragement and mentorship early in my career. I suspect, honestly, that Gary had a much better idea what I was up to than my Father did, but they both believed that I could do this. Now, almost 44 years on, both men are gone and I am, a little bit more, on my own. I hope I make them proud.
Tim Schall

Wow, just wow…so wonderfully thoughtful, Tim!
Marty H.
*****
Every time I saw Gary I would ask him how he was doing. He always said, “Just this side of perfect”.
I enjoyed working with him on the ISDN remotes I would set up for KBCS at Folk Life and when we did the farmer’s market in the Central District one year.
Sam Roffe

I can remember back in the day when a phone line was the easiest way yo do a remote I’d call the phone company and no one seemed to understand what I wanted… until I talked to Gary.
Julian

I seem to recall first meeting Gary around 1978-79 when Green River was setting up lines for sports remotes around the area. Over the years, we’d chat about various technology. I always enjoyed his stories. Eventually, I came to realize how spoiled we had become to have such a supportive and dedicated technician/engineer providing telco support.
John, your SBE presentation with Gary was truly a pleasure to have brought to our members. Thank You!
Jon Kasprick

I met Gary thru ham radio. He was always a friendly voice on the 147.080 repeater. Talking bout PNW Bell and our experiences, I envied him. I was in residential installation and repair and outside buried cable on multiple levels. He was in the field I could only dream of getting into. It was interesting to listen and learn from the man. So knowledgeable and easily understood, a great communicator. He always was friendly to all and took the time to chat. A giant to us in the ham radio world as his huge contribution to our communications abilities was so enlarged and augmented by his home built autopatch that accompanied the repeater on Tiger Mt . Thank you Gary, our hearts grieve at your loss, you were a blessing to us all in many ways. Though I didn’t spend much time with him, his uniqueness, friendliness, and huge knowledge level are a loss. Godspeed Gary, you are in a better place. We will remember you and your contribution to us all in business and personal lives.